The sanctuary is surrounded with stained glass which inspires and grounds you in this sacred space.

The stained glass windows of the church were created by three studios during different eras. The earliest windows were made in the late 1920s by the A. L. Brink Studio of New York City; one window in the sanctuary south wall was designed in the 1930s by Nicola D’Ascenzo and fabricated by the D’Ascenzo Studio of Philadelphia; and the chapel windows were made during 1959, 1960 and 1972 by the Willet Stained Glass Studios of Philadelphia.

The Memorial Window in the chancel area, given in memory of Rachel Babcock Upjohn, was created in the late 1920s by the A. L. Brink Studio and signed Alfred E. Floegel pinx (painter), and A. L. Brink fecit (fabricator). The 12’ x 24’ window presents the “Life of Christ” on two levels of five panels each. Large panels on the upper level include the central figure of Christ as the Peace Maker, holding a globe surmounted by a cross and raising one hand to bless the world. At his left are figures of his mother Mary and St. Paul, holding a book and sword; to his right are figures of his cousin John the Baptist, clad in a rough camel’s hair shirt, and St. Peter, holding a scroll and keys. Smaller panels on the lower level(below) include familiar scenes in the life of Christ: the Nativity, Baptism, Crucifixion, Resurrection and Ascension.. 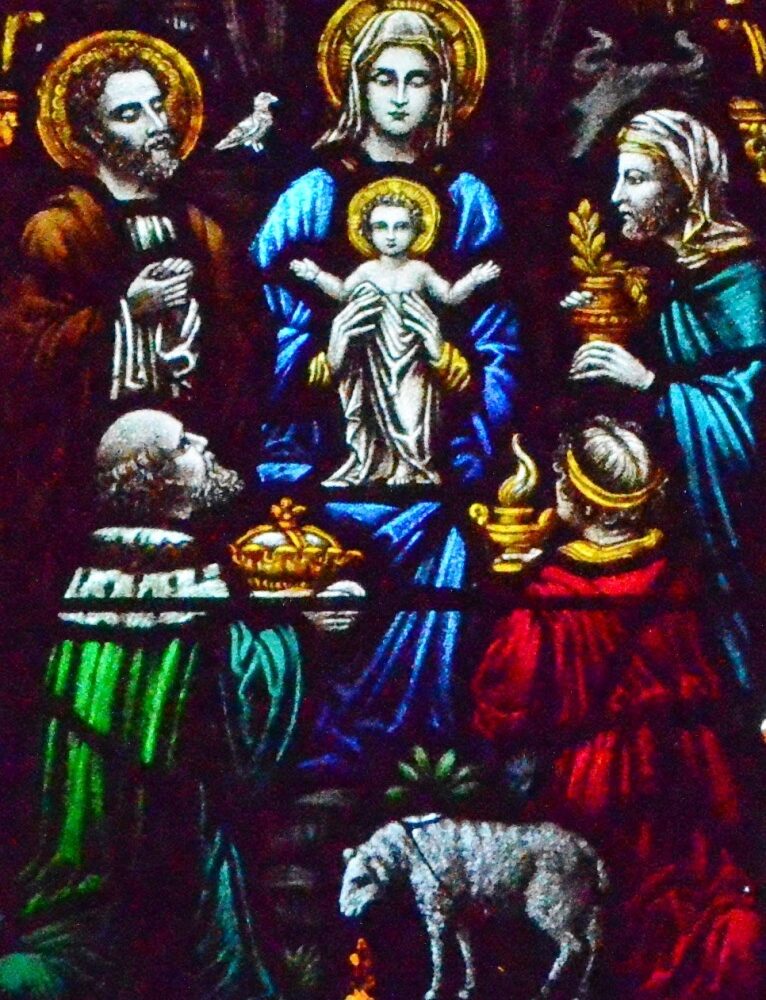 Presentation of gifts by the three wise ones. 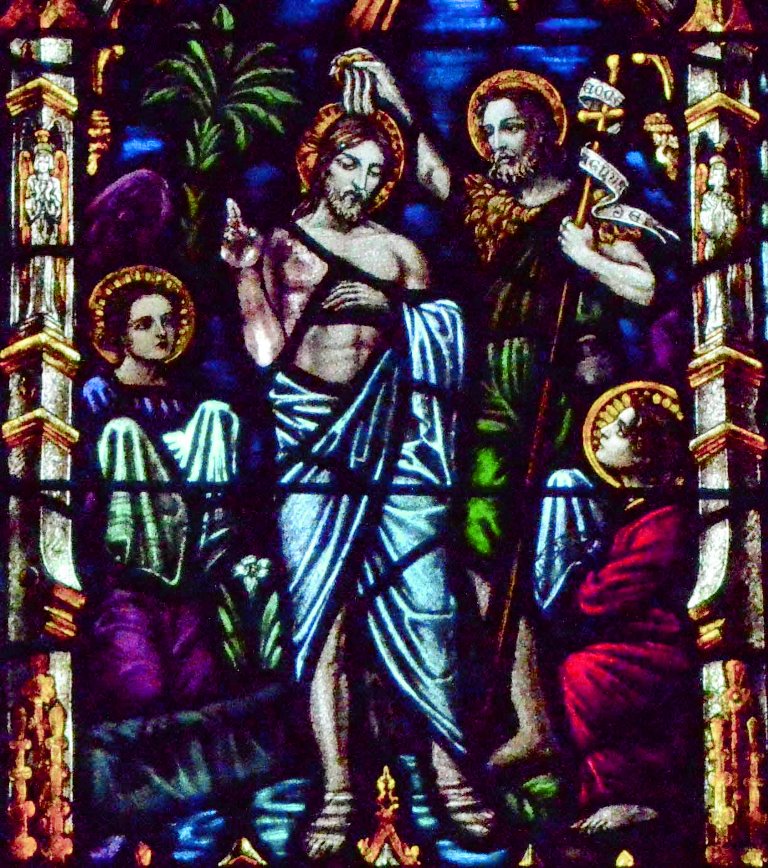 Baptism of Christ by John the Baptist. 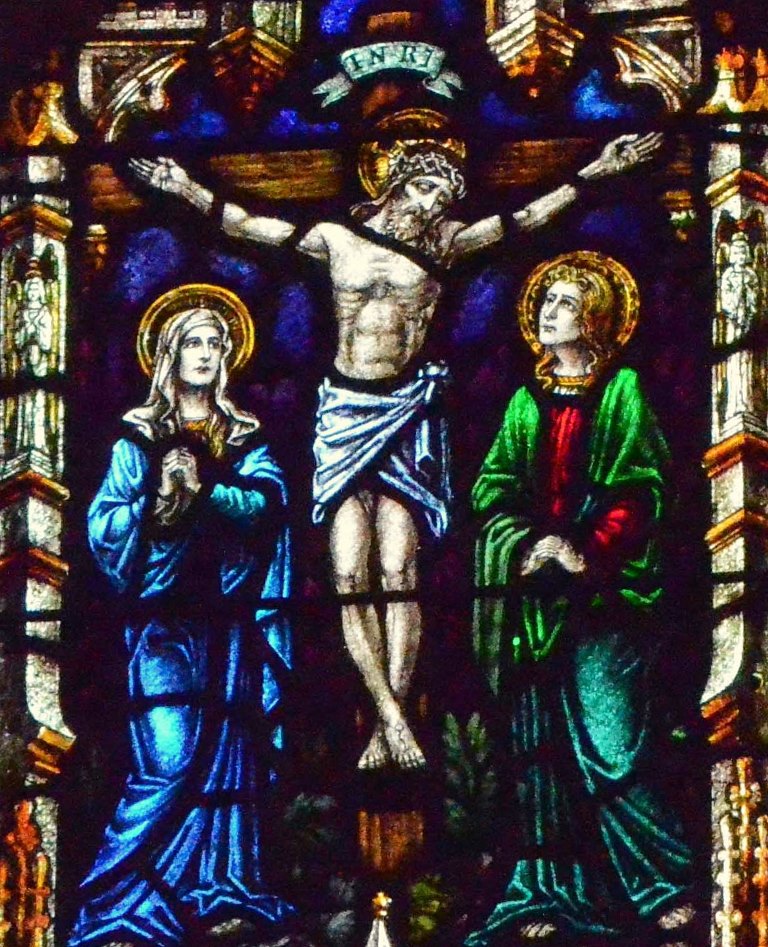 Christ on the cross. 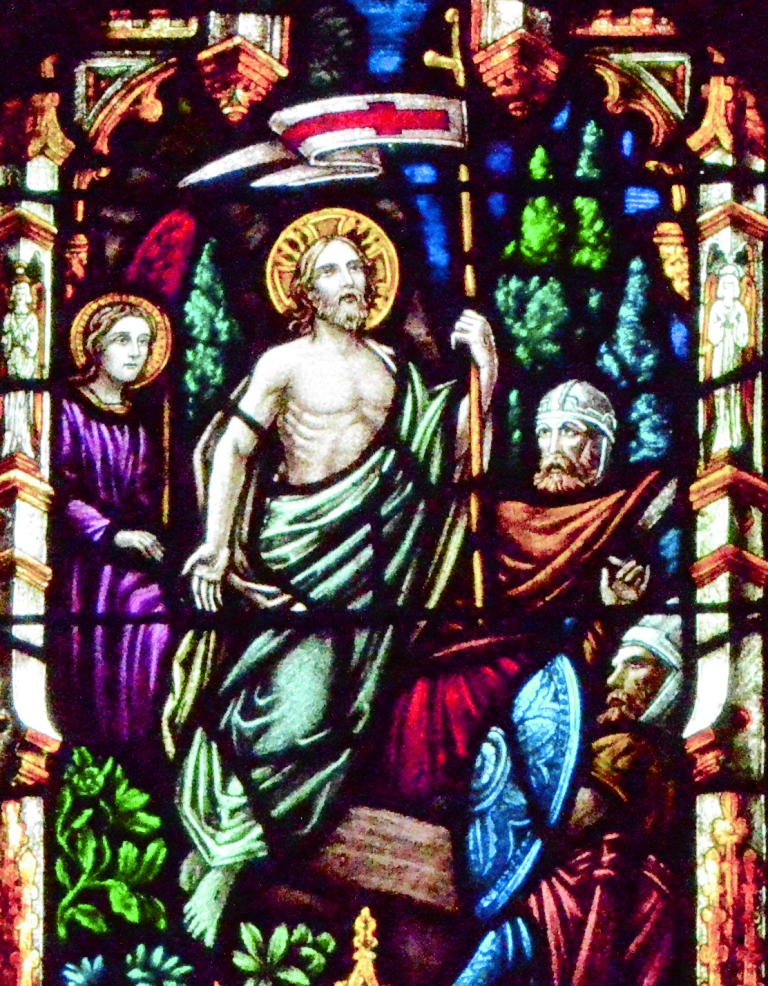 Christ's resurrection from the tomb. 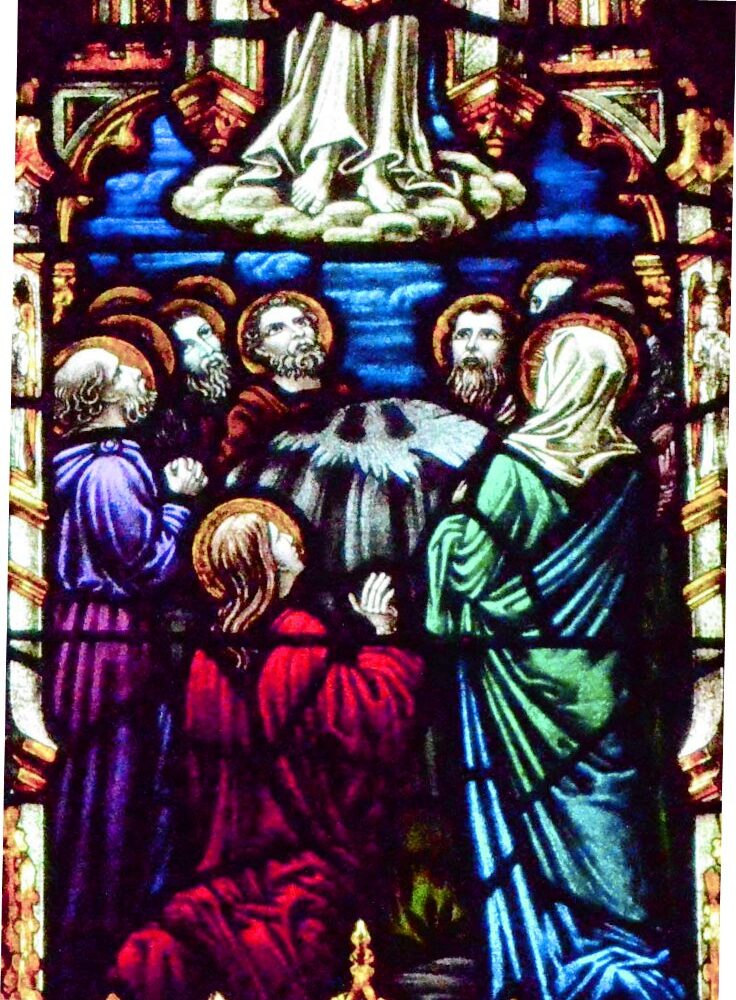 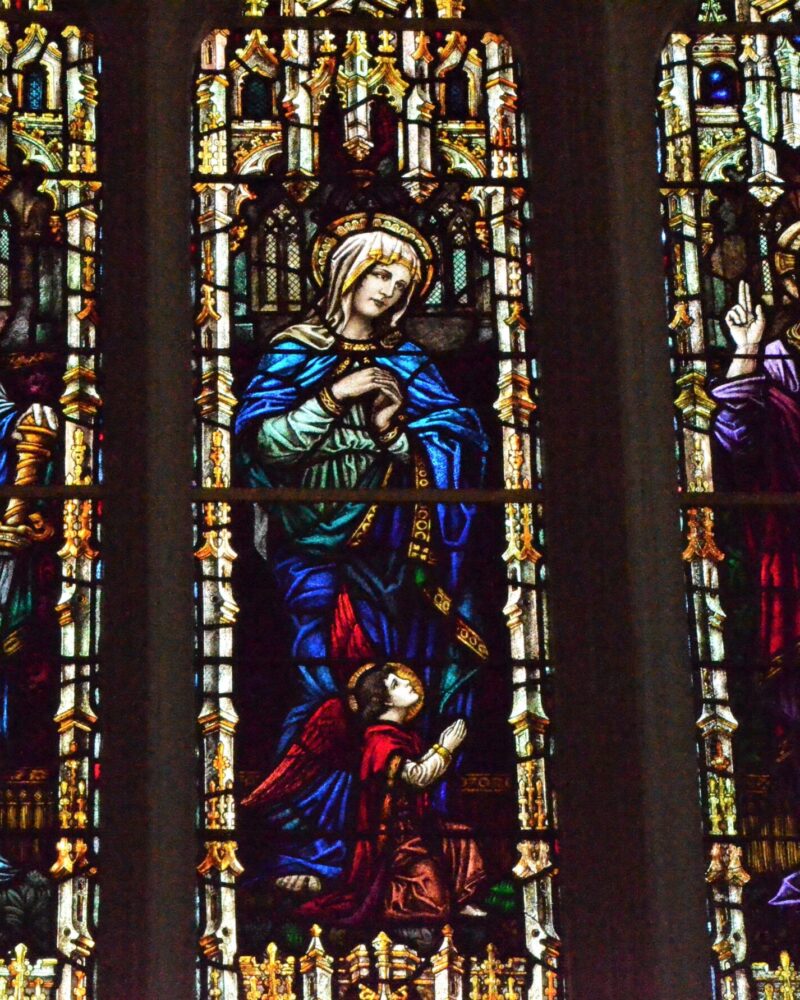 St. Paul, holding a book and sword; Mary and Christ. 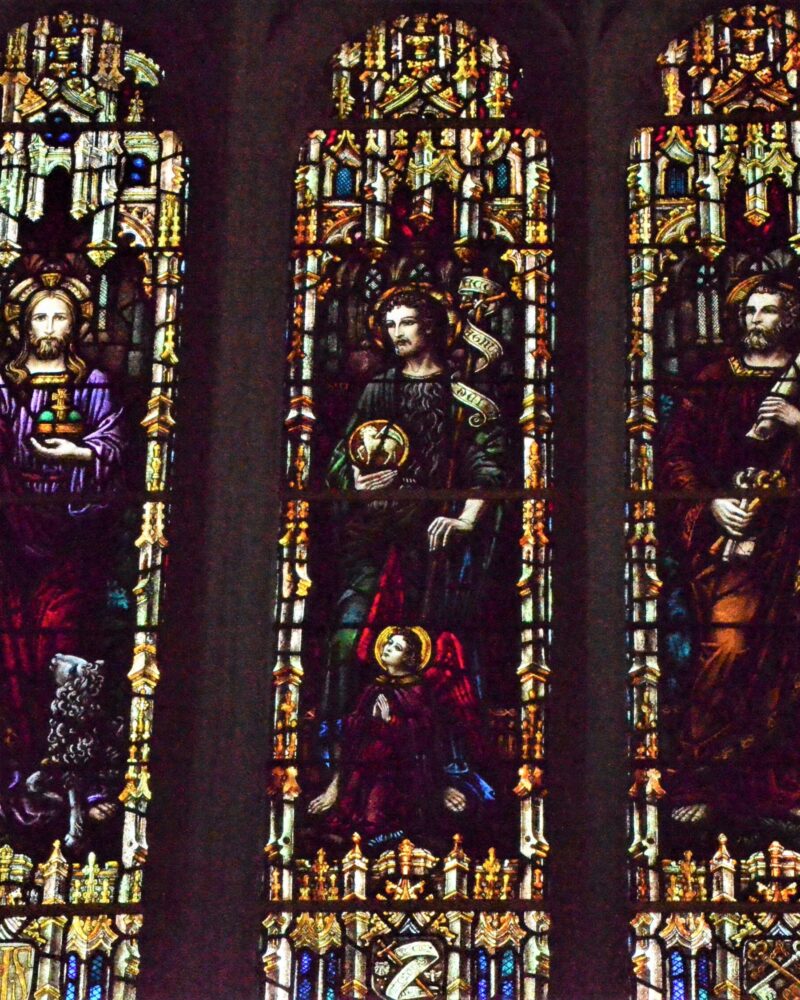 John the Baptist, clad in a rough camel’s hair shirt, and St. Peter, holding a scroll and keys.

The A. L. Brink Studio also created the clerestory and nave aisle windows. Twelve 10’ x 20’ clerestory windows along the east and west sides of the nave contain approximately 370 pieces of glass each, most of the pieces painted in a matte finish. Each window on the west side includes four small scenes from the Old Testament, while those on the east side feature little scenes from the New Testament, a total of 48 scenes in all. 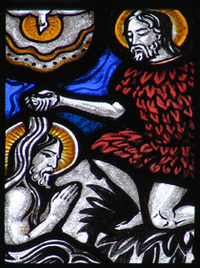 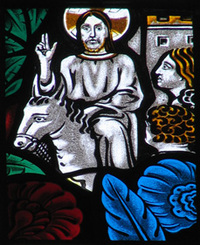 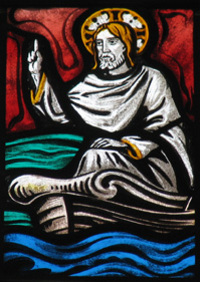 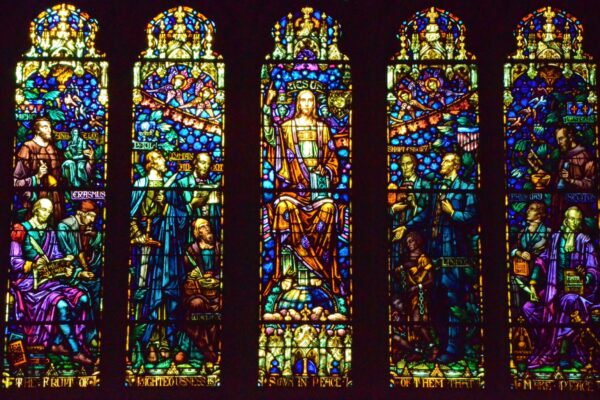 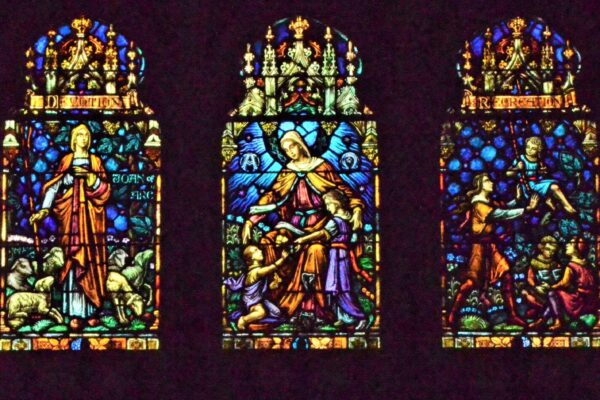 The Chapel Windows of First Congregational United Church of Christ were created by the Willet Stained Glass Studios of Philadelphia. Four windows designed by Marguerite Gaudin were installed in 1959 and 1960. The John Robinson Window designed by Colum Sharkey was added in 1972.